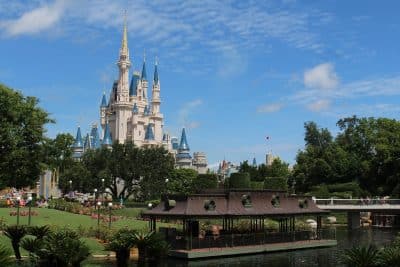 With the continued growth of cremation and ash scattering services, people are looking for memorial ideas and more unique locations to pay their final respects.  People are having their ashes scattered at sea, they are planting trees and holding private dedications, they scatter ashes in public beaches and baseball fields, etc.  While Ash Scattering continues to grow in popularity, most people remain unsure of the laws and regulations governing the scattering of ashes.

When I first heard about ashes being scattered at Disney World theme parks, I was a little bit in shock! Talk about original!  According to a Oct. 2019 Wall Street Journal article, it is actually fairly common. As I started trying to wrap my head around this strange and foreign thought, I remembered some old family friends whose only thoughts were of their next jaunt to Disney. In fact, their whole house looked like a Disney trinket shop! With Disney holding such a special place in the hearts of families everywhere, it’s no surprise that many have considered having their ashes spread there at the park.

It has become so common for people to scatter ashes at Disney World that custodians at the park have a special code for cleaning it. It’s called “HEPA cleanup.” When custodians hear that code come across, it means yet another park guest has scattered the cremated ashes of a loved one somewhere in the park.

Thoughts of scattered ashes falling from Disney rides and landing on unsuspecting people below is almost too much to think about! Or do people pour them into one of the many waterways within the park? According to the Wall Street Journal article, there is no lack of imagination.

Human ashes have been spread in flower beds, on bushes, and on Magic Kingdom lawns; outside the park gates and during fireworks displays; on Pirates of the Caribbean and in the moat underneath the flying elephants of the Dumbo ride. Most frequently of all, according to custodians and park workers, they’ve been dispersed throughout the Haunted Mansion, the 49-year-old attraction featuring an eerie old estate full of imaginary ghosts…“The Haunted Mansion probably has so many human ashes in it that it’s not even funny,” said one Disneyland custodian. (One can only wonder if people think being laid to rest in the Haunted Mansion will turn them into a ghost so that they can live at Disneyland forever.)

However, the truth of the matter is more somber. Some people agree to spread their loved ones’ ashes at Disney parks, so that they can feel like they’re enjoying the place with them one more time.

Disney strives to make everyone happy, but allowing ash scattering in the parks is definitely a leap too far. Ash scattering is explicitly forbidden, and if you are caught, you will be escorted from the park. Because of this, people have resorted to hiding them in pill bottles, make-up compacts, and even plastic bags in the bottom of purses. Sometimes, families will even split up the remains to sprinkle around the park in multiple places!

Why Shouldn’t You Scatter Ashes at Disney?

Again, Disney is known to be called the Happiest Place on earth, but don’t expect the clean up crew to feel that way when they get that “HEPA cleanup code”! You may recognize the HEPA acronym as a special kind of filter needed to suck up very fine particles, like human ashes. That’s right…instead of eternity in Disney, it’s into the ol’ vacuum. That’s probably not what your loved one had in mind!

Personally, I’m a big fan of the outdoors, and would much rather have my ashes scattered in a place where I can be one with nature forever, undisturbed. Even then, however, you have to account for laws and regulations.  If you perform a professional ceremony using services like the ones we offer at Rest Ashured, you can conduct a respectful ceremony for your loved one and scatter their ashes legally and safely. That would also avoid legal issues and possibly being banned from a place you and your family love so much!

So if you’re thinking about scattering a loved one’s ashes at Disneyland or Disney World, just realize that the parks know about this sort of thing. They’re prepared for it. They even have a code for it.

“I want adventure in the great wide somewhere.”

Belle
Beauty and the Beast

1 thought on “Do People Really Scatter Ashes at Disney World?”